Exploring the Regional Traditions of Mexico's Day of the Dead

With time-honored customs dating back to the indigenous Aztecs in 1100 AD, many consider Día de Muertos (Day of the Dead) as the oldest festival in the world. It was originally observed at the beginning of the summer, but it was moved at the time of Spanish colonization to coincide with All Souls' Day (November 2), a tradition observed by western Christianity. Consequently, its practices are cherished in every country, pervaded by Hispanic lineage and culture. But nowhere is it celebrated to the extent it is in Mexico, and as such, UNESCO recognized the holiday as an indelible part of Mexico's cultural heritage in 2003.

You can witness Day of the Dead celebrations in many parts of Mexico, and the rituals tend to vary from region to region. Here are some destinations where the festivities are particularly colorful.

One of Mexico's most famous Día de Muertos celebrations takes place on the small island of Janitzio in Lake Pátzcuaro, located in the Mexican state of Michoacán. Every year on November 1, thousands of visitors gather in the local panteón (cemetery) to watch as the indigenous Purepecha people perform lively Día de Muertos rituals late into the night. There are processions with music and folk dance performances, but the most impressive sight might be when local fishermen in rowboats illuminate the lake with torches. 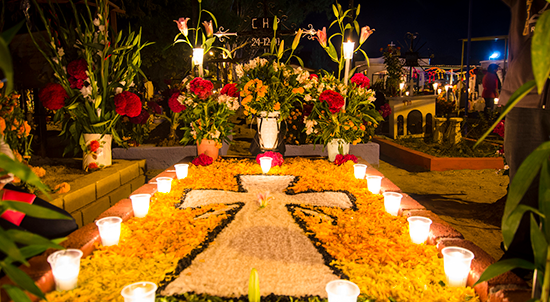 The southern Mexican state of Oaxaca is known for its regional cuisine, mezcal distilleries, traditional artisans, and generally well-preserved culture. During Día de Muertos, colorful celebrations take place in Oaxaca City. From October 31 through November 2, the largest graveyard in Oaxaca City, Panteón de San Miguel, is decorated with pan de muerto (sweet bread or bread of the dead), marigold flowers, candles, and other offerings. Near the city in the Oaxacan village of Xoxocotlán, both the Panteón Viejo and Panteón Nuevo (also called Panteón Mictlancihuatl) attract hordes of crowds on October 31 to admire candlelit gravesites while listening to the sounds of live mariachi bands. 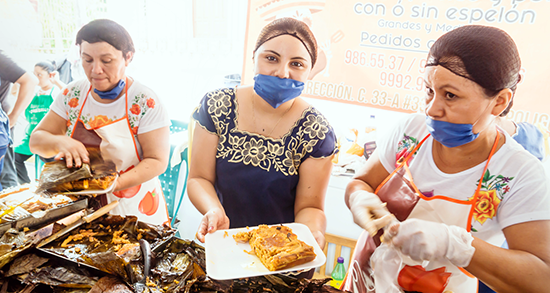 In Mexico's Yucatán Peninsula, Day of the Dead celebrations are known as Hanal Pixán, or "feast for the souls." During the holiday, many families in the Maya region prepare elaborate traditional dishes for the return of their ancestors, participate in evening processions, and set up ofrendas (altars of offerings) in their homes.

Sophisticated altars go on display in the zócalo (main square) of the Yucatán capital, Mérida. The decorated gravesites in local cemeteries are also well worth seeing from October 31 through November 2.

The inaugural "Desfile de Día de Muertos" parade in Mexico City was held in 2016. It was actually inspired by the opening scene of the James Bond film Spectre, which features a crowded procession in the city's streets. Every year since, on November 2, millions of people gather in Mexico City's Plaza del Zócalo to watch people parade around dressed as colorful alebrijes (mythical creatures) or the elegant La Calavera Catrina (the skeletal symbol of Día de Muertos). On the outskirts of the capital in the southern Xochimilco neighborhood, decorated canals and chinampas (floating gardens) set the scene for special night Día de Muertos rides by trajinera (gondola boat) on November 1.

The birthplace of engraver Jose Guadalupe Posada celebrates Day of the Dead every year with the Festival de las Calaveras (Festival of Skulls) from October 28 to November 2. The festival takes place on the city fairgrounds with exhibitions of handicrafts, stands with traditional food and seasonal fruit, varied theater productions, and concerts. The grand parade of calaveras along Aguascalientes' Avenida Madero is a highlight of the festival.

The national holiday, which is celebrated around the state of Puebla from October 28 to November 2, honors lost loved ones by paying tribute to — and praying for — their spirits. Its origins can be traced to pre-Hispanic times, when the Aztecs held a month-long ritual for the goddess of death, Mictecacihuatl. Nowadays, families set up altars in their homes or businesses to remember people who've passed away (often during the past year). The notion is that, by doing so, they welcome, nourish, guide, and otherwise assist the souls in their journey after death.

Other Day of the Dead Celebrations